What is Brussels? Laurent Dubois Puts Terror Attack in Context

What Is Brussels? A crossroads of history, a city of immigrants, an unfinished but essential project to end the cataclysmic conflicts on the European continent. 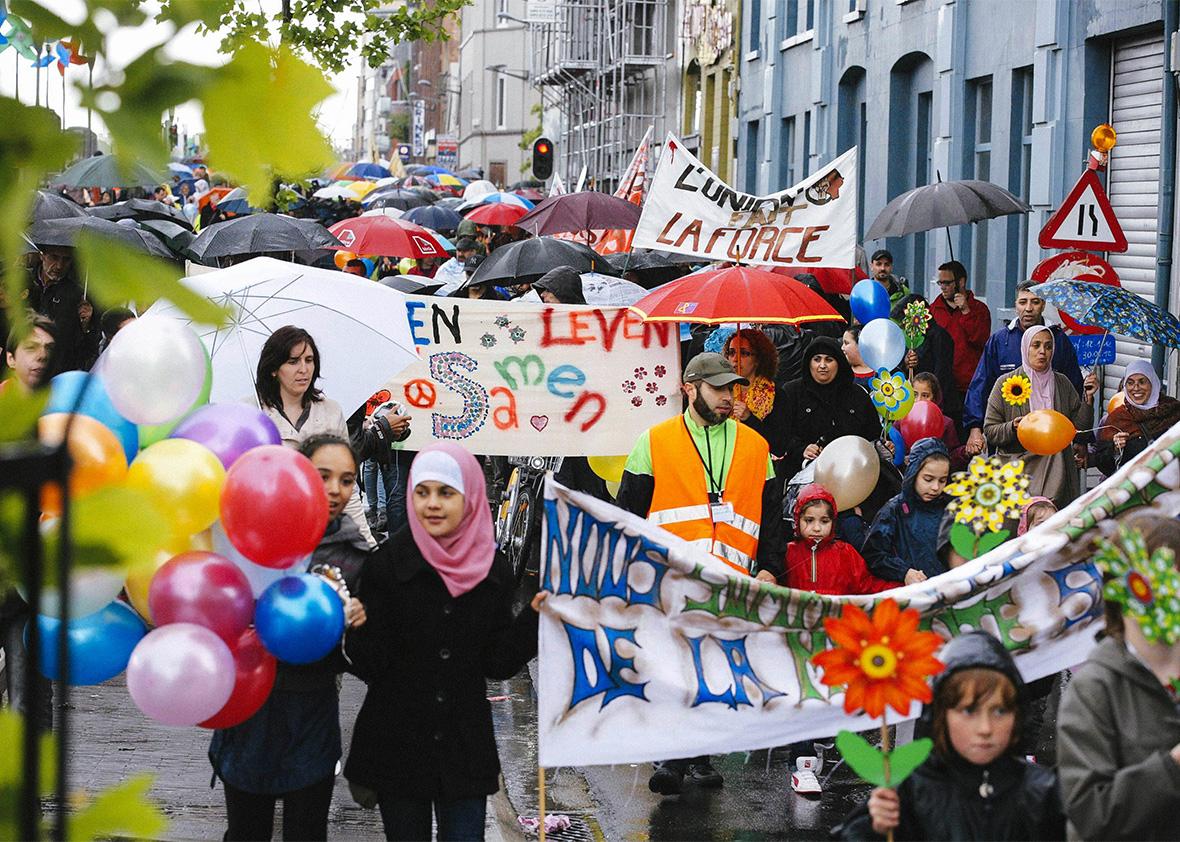 People take part in a “multicolored” march for peace and “living together,” organized by the residents of the Molenbeek neighborhood of Brussels, on June 24, 2012. PHOTO © NICOLAS MAETERLINCK/AFP/GETTY IMAGES

The images of Tuesday’s attacks are of a city in transit, a crowded metro and a bustling airport, banal sites of everyday movement—now turned into spaces of death. The city is much less legible and familiar than Paris.  We learn of fragments of its geography—an immigrant neighborhood called Molenbeek and downtown subway station called Maelbeek—but what connects them?

Brussels is many things at once: the de facto capital of the European Union, a contested site in the long-running conflict between Dutch- and French-speaking groups, and a city of immigrants, remarkably cosmopolitan and diverse—a crossroads of histories and conflicts. The city is a place, but we should also think of it as a project: imperfect, unfinished, but essential.

Belgium was occupied by the Germans first during World War I and then again during World War II. In time, Brussels became the capital of a project meant to put a permanent end to the cataclysmic conflicts within the continent: the European Union. I was born in Brussels in 1971. My family moved to the U.S. soon after, so the city has remained for me a kind of distant home—as I grew up, I witnessed it change, from one summer visit to the next, in a kind of stop motion. I vividly remember seeing the giant buildings of the E.U. headquarters going up, displacing older neighborhoods, and visiting the transformed center of Brussels with my grandfather—who had served for a time in the Belgian government—traveling through the Maelbeek station that was bombed Tuesday. The transformation into the capital of Europe profoundly reshaped Brussels, helping to make it the global city it is today ...

Read the full essay at Slate.

Over the past couple of years, we've held several discussions at the Forum for Scholars and Publics on global terrorism. In addition to those conversations, our faculty have also been drawing on their scholarly research to write analyses that can help inform public understanding of the contexts within which terror attacks are taking place. This essay was published by the Director of the Forum, Laurent Dubois, at Slate after this week's attack in Brussels.