When the Deepwater Horizon Exploded

Award-winning author Belle Boggs reflects on a photograph by Southbound artist Daniel Beltrá. As part of our Call & Response series in conjunction with Southbound: Photographs of and about the New South, we’ve asked artists, writers, and poets to respond to a photograph of their choice in the form of short written pieces.

Daniel Beltrá, Oil Spill #4. Born in Madrid and based in Seattle, Daniel Beltrá's prize-winning photographs of the aftermath of the 2010 Deepwater Horizon disaster in the Gulf of Mexico chart the immediate environmental impact of both the largest oil spill and the largest use of chemical dispersants in U.S. history. ON VIEW AT THE POWER PLANT GALLERY AT DUKE UNIVERSITY.

The Deepwater Horizon oil spill unfolded, for me, on television news—like that other terrible Gulf breach, the abandonment of New Orleans’s people following Hurricane Katrina.

For days I watched the footage of the spill, oil billowing into the water like smoke, thinking, can’t they stop it? Why can’t they stop it? For 87 days they didn’t stop it—three million barrels of oil, then four million. The seal on the well wasn’t permanently capped until almost five months later. It made me think of another kind of greedy heedlessness, the overfishing of sperm whales in the 19th century, when dead whales were left to bleed out, drifting in the ocean, after their precious oil was extracted. Whaling was replaced, of course, by oil drilling.

Beltrá’s photograph is eerily beautiful, almost otherworldly. The greenish blue water, the black oil marbling the surface, flashes of orange like flames. The pastel colors of the ship, the floating barge—they look like toys, too small for the work of cleaning up 70,000 miles of polluted water. It is a reality I think of daily, with a dread that never really leaves me—that we are, finally, too small for cleaning up the mess we’ve made.

This summer I went to Hilton Head Island with my family—an island my parents love because they’ve been going there since before I was born, when they used to stay in a beachside motel with windows that opened to the breeze. Today there is an abundance of everything—gated neighborhoods, resort hotels, plastics, air conditioning. SUVs idling in the grocery store’s parking lot.

“There wasn’t anything here back then,” my dad was telling an older couple who just bought a timeshare. We were sitting near the pool we liked best, which was cooled with refrigerated water. “Our motel was thirty-five dollars a night.” He preferred it that way, his tone implied, but what can you do? My older daughter, who wasn’t born when the Deepwater Horizon exploded, was eating a popsicle he’d bought for her. She loves the earth and wants to save it.

There was something small and pink and shining, caught in her wavy hair. I reached for it. A plastic stick-on earring, heart shaped, which she’d put on before going boogie boarding. The other one was gone, probably lost to the surf. It reminded me of the ship in this photograph—candy-colored, tiny, adrift. 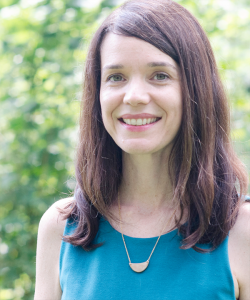 Belle Boggs is the author of The Gulf: A Novel; The Art of Waiting; and Mattaponi Queen: Stories. The Art of Waiting was a finalist for the PEN/Diamonstein-Spielvogel Award for the Art of the Essay and was named a best book of the year by Kirkus, Publishers Weekly, the Globe and Mail, Buzzfeed, and O, the Oprah Magazine. Mattaponi Queen, a collection of linked stories set along Virginia’s Mattaponi River, won the Bakeless Prize and the Library of Virginia Literary Award and was a finalist for the 2010 Frank O’Connor International Short Story Award. She has received fellowships from the National Endowment for the Arts, the North Carolina Arts Council, and the Bread Loaf and Sewanee writers’ conferences. Her stories and essays have appeared in the Atlantic Monthly, Orion, the Paris Review, Harper's, Ecotone, Ploughshares, and elsewhere. She is an associate professor of English at North Carolina State University, where she also directs the MFA program in creative writing.