“No story is told alone.” Professor Eileen Chow on writing in community

On Friday, September 23, Jennifer Ahern-Dodson, Director of Duke’s Faculty Write program, conducted an in-person interview with Eileen Chow in the “How I Write” series. With a group of colleagues and students in attendance, it was an honest, intimate conversation about writing anxiety, academic challenges, and finding joy. 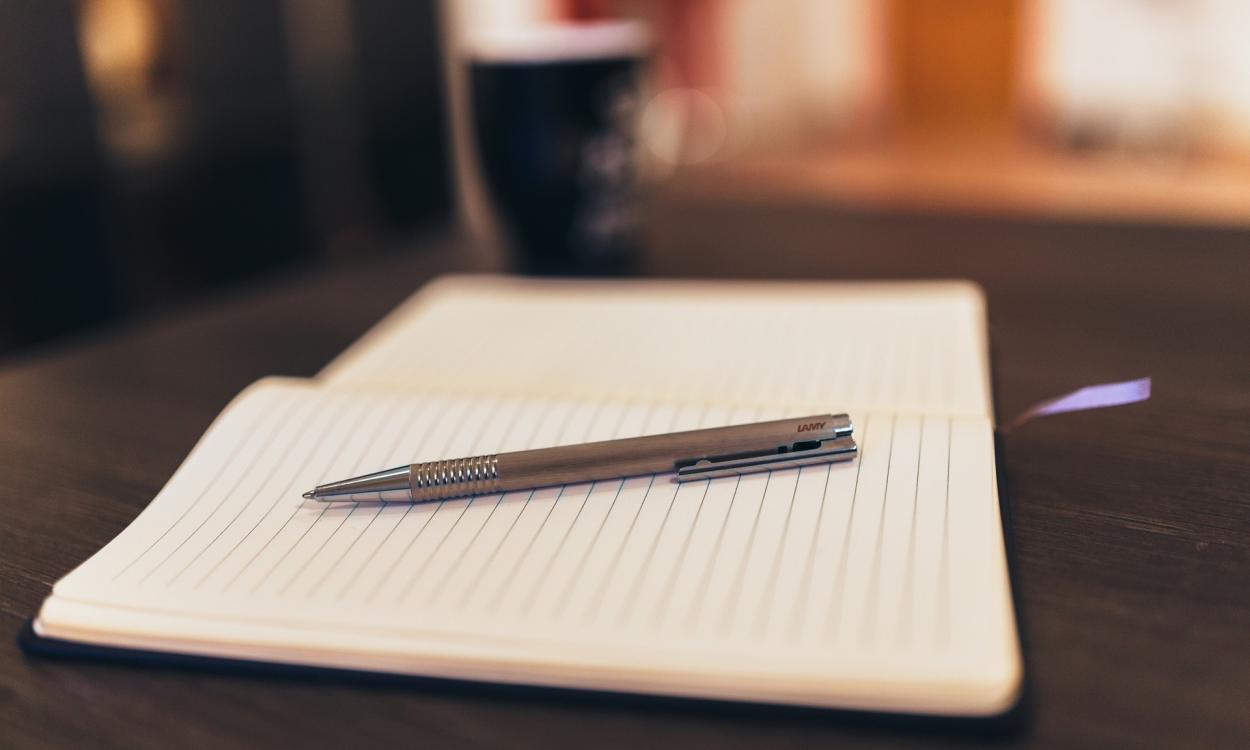 Poetry Twitter. Academic writing about traditional and contemporary literature. Translations. Popular articles. All of these genres flow from the fertile mind of Eileen Chow, Associate Professor of the Practice in Chinese and Japanese Cultural Studies at Duke.

“I was a translation mistake,” Chow began, when asked to share what she wanted the audience to know about her. She was named for a typhoon that arrived in Taiwan the day of her birth; called “Eileen” in the local newspaper at the time, the storm’s actual name was Ellen. “The reason I tell this story is that it tells a bigger story of who I am. I was always caught between cultures.”

As a child, Chow was caught between cultures in Taiwan, where her parents relocated from China. Emigrating to the United States at the age of 16, she found herself straddling the social boundary between adolescent and adult. Once settled in the US, she began to consider herself “Asian American,” a transition that she continues to ponder. As a scholar, having studied comparative literature focused on Renaissance Europe, she got a job in Asian Studies and began to study contemporary literature.  Summing up the effect of all of these experiences of “outsiderness” and “in-betweenness,” she said, “I write across everything because I’m so confused as an identity.”

“This is what brings such a depth and richness to your work, these complex mistakes and intersections and rich overlap,” Ahern-Dodson observed.

Perhaps partly as a result of feeling like an outsider, Chow has always had an instinct to form writing communities. In graduate school, she and a friend shared writing plans every day. “In the morning we would agree to write: what today, how many words. We would not meet until we got to that wordcount. We met for really good Chinese food after hitting our goals.” That could lead to an unpredictable dining schedule, but one filled with camaraderie. “Sometimes we ate at noon, sometimes at three.” What matters is “just finding another person who will be generous with you.” That experience inspired her to seek more opportunities to join with other academic women in support of each other’s writing. 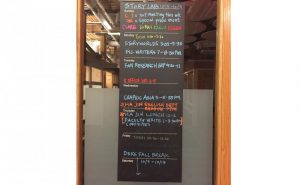 At Duke, she co-founded the Story Lab, which offered a co-writing space along with reading and writing groups encouraging interest in fan fiction and novel-writing. Chow is delighted that several published novels came out of these groups, including two trilogies. But as excited as she is for those accomplishments, she also emphasizes the value of the experience of writing in community for all the participants. Moments in which faculty, students, and staff shared poems or simply wrote quietly together have long-lasting resonance. Chow emphasized what for her is a simple truth: “No story is told alone.”

Throughout the discussion, Chow focused on the joy of writing and practices that can help overcome obstacles to that joy. She writes each day by hand in a notebook, and she appreciates beautiful notebooks, pens, and stickers. “Guilt-tripping doesn’t work for me; for me, it’s rewards.”

Guilt-tripping doesn’t work for me; for me, it’s rewards. 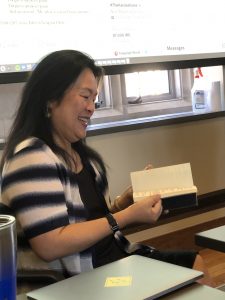 Chow seeks “a small, joyful project” when she needs to rediscover joy in her own writing. For her, this tends to be translating poetry. Over the past few years, she has also turned to sharing her work publicly. In a recent Tweet, she shared her translation of a brief Chinese poem by the 12th-century warrior poet Xin Qiji. The poem, about living, suffering, and leaving some things unsaid, seems especially resonant during these uncertain times.

Read more about this poem, and listen to Eileen Chow read the poem in Chinese and Paul Holdengräber read Chow's English translation.

“Poetry is very private to me, but I wanted to put it out there; I started this hashtag #everynightapoem. Now other people use it too, which is great. I had a small following then, 1,000 people or less; I said, in Trump’s America it’s all blather, blah blah blah; the antithesis is poetry, where every word counts. I wanted to embrace that, remind people that words matter.” 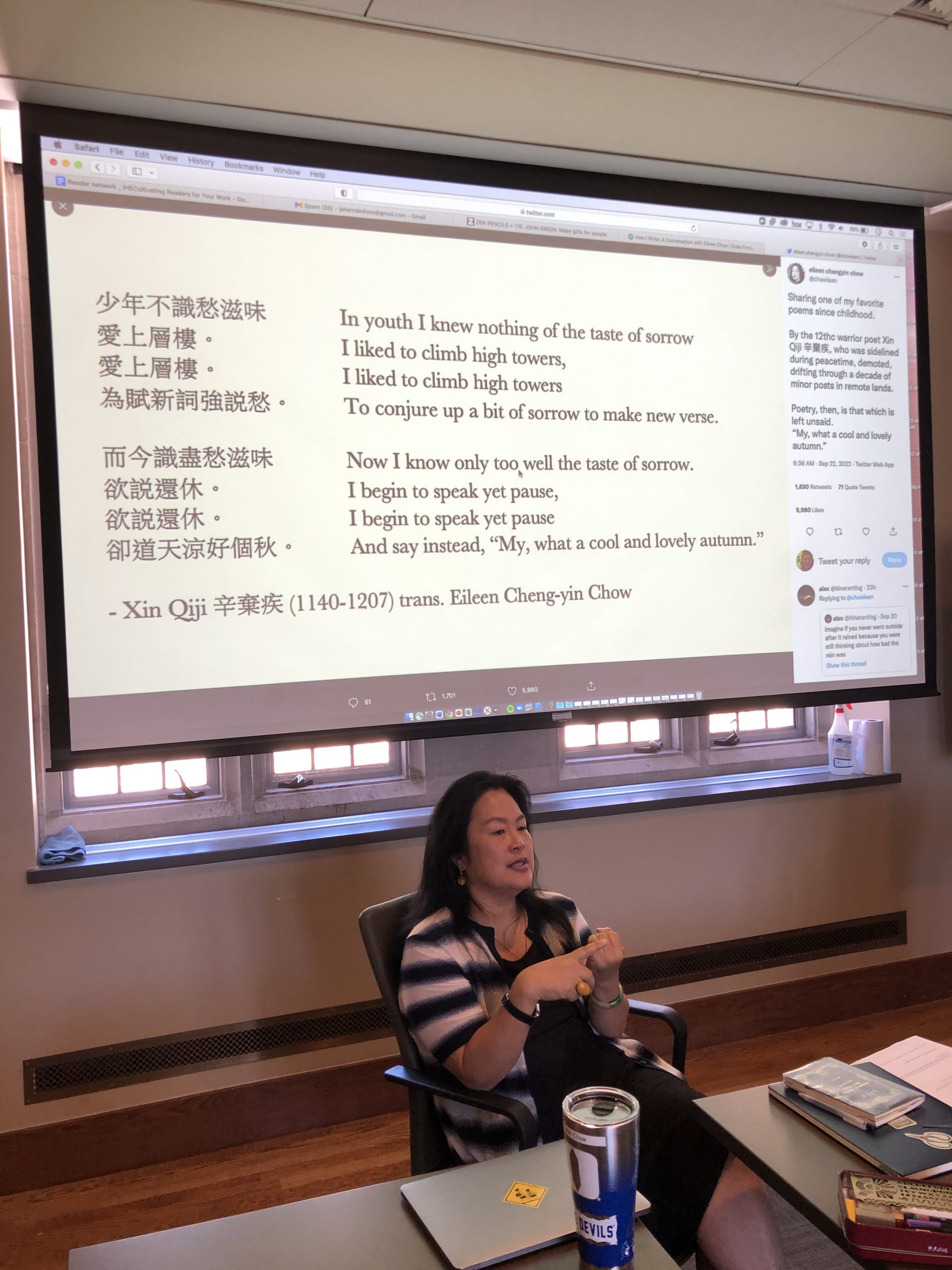 Eileen Chow in front of an image of her recent Tweet.

An ambitious, longer-term translation project is Big River, Big Sea by Da Jiang Da Hai, a Chinese language novel about momentous changes in China in 1949 that has never been translated into English. This project brings “both agony and joy”: Because “it’s the most read creative nonfiction in the greater Sinosphere, there’s a sort of duty and responsibility of getting it out there.” Yet, she hasn’t let the weight of that responsibility get in the way of joyful creativity.

The novel’s structure as a letter to the author’s son served as inspiration for Chow’s recent essay on friendship. And, in keeping with her “in-betweenness,” she used the film Everything Everywhere All at Once to frame the “tenuous question of finding friendship with your mother,” interweaving her love of popular culture with her appreciation of the classic novel.

Although Chow began the discussion describing herself as writing from within a “confused” identity, what emerged over the course of the hour was a writer, scholar, and generous colleague. Knowing yourself and embracing who you are is, she implied, ultimately the key to finding joy in writing.

About the How I Write series: Developed by Jennifer Ahern-Dodson for the Faculty Write program, the “How I Write” series centers our own writing stories as academics: How we write, why we write, what we do when we struggle, and what sustains us. In small group forums, participants exchange ideas about writing, share strategies for writing and publishing, and ultimately dispel myths about how writing “should” happen (like scribbling alone in the attic), by talking frankly about how it does. Ultimately, “How I Write” conversations offer an opportunity for us to learn from each other. To connect and to build community around a shared experience—writing.