On November 15, 2017, Jay Hammond and the Forum for Scholars and Publics hosted a reading and performance by Eugene Chadbourne and friends. Chadbourne kicked off the event by reading passages from his tome Dreamory and was joined on stage by David Menestres and members of his family band, The 13 Society. Hammond reflects on the evening.

To state the contrast schematically, anthropological humanism begins with the different and renders it — through naming, classifying, describing, interpreting — comprehensible. It familiarizes. An ethnographic surrealist practice, by contrast, attacks the familiar, provoking the irruption of otherness — the unexpected. —James Clifford, The Predicament of Culture

There will come a time when everybody who is lonely will be free to sing & dance & love. —Frank Zappa, "Take Your Clothes Off When You Dance"

On November 15, 2017, Greensboro-based musician Eugene Chadbourne intertwined readings from his book Dreamory with a musical performance that spanned the stylistic shifts of his long career. The performance took place at The Nightlight Bar & Club in Chapel Hill, NC, and was sponsored by the Forum for Scholars and Publics.

The Forum facilitates unexpected collaborations between academics and members of the broader public, such as journalists, artists, and activists. Chadbourne’s writings have always struck me as the kind that should be brought into dialogue with more traditional scholarly work. Given the opportunity to coordinate an event for the Forum, I sought to facilitate a conversation between Chadbourne’s voice as a musician and his voice as a writer and interpret his work through an anthropological lens.

I had been aware of Chadbourne’s music for a number of years. From his early solo guitar albums through his work on the New York downtown scene and up to his longstanding obsession with early country and old time music, he has a singular voice as a musician. Who else would have decided to move their musical home base from the jazz lofts of 1970s Manhattan to the dive bars of 1980s Greensboro? Who else plays free jazz solo breaks on Johnny Cash songs? Who else would have invented the electric rake?

I came across his writings later, though. About a year ago, I saw him perform for the first time at the Nightlight. The Nightlight has been artist-run for many years, and the extent to which co-owner Charlie Hearon manages to support acts across genres and mediums is truly exceptional. After the show, I noticed Chadbourne’s enormous, recently published book Dreamory on the merchandise table. I have always been taken by the possibilities created by working across different artistic and intellectual mediums, so it was exciting to see that an accomplished musician had devoted such effort to publishing his writings.

When I initially approached Chadbourne, I asked him if he’d like to do a reading, take a break, and then play a set of music. He thought it better to combine the reading and music into a single performance. By the night of the event, he had prepared, in his words, "a two-hour music and reading trip with no break." Backed up by daughters Lizzie and Molly and longtime bassist David Menestres, he treated us all to a two-hour odyssey through his playful creative restlessness as both a writer and a musician.

The night started with Chadbourne reading for nearly 25 minutes. (He read so feverishly that I worried his voice might give out before the music began.) Dreamory is part memoir, part dream journal, part tour diary. I sometimes refer to Chadbourne as a master ethnographer of the sh*tty gig, and this is precisely where he started.

He doesn't bother with transitions between dreams and reality, much less citations, but that doesn't make his observations any less intellectual.

He was traveling with a Russian band that didn’t have the documents to get into Italy. Somebody has an idea for an alternate route, but before we can get to the details, the band is at a hotel preparing for the next day’s travel. Finally they’re off to bed, and for the rest of the reading we’re in and out of a dream world. It starts with a canal doing "normal canal stuff" but gives way to a decreasingly coherent reality in which his feet seep into the mud, giraffes appear in the snow, and he dies and returns from the dead. The reading churns on. Many moons later and in a different hotel room, likely in New Orleans, he’s awakened from his dreams by the sound of an electric bass.

It’s the electric bass of the house hotel band. He lies in bed, perhaps awake, pondering the incommensurability between the sound of the electric bass and the upright bass on the Charles Mingus album playing in his room. He wonders who was the better upright player, Charles Mingus or Charlie Haden. Hearing the two sounds together is "like oil and water." The intimacy and precision of the acoustic bass seems to have nothing to do with the invasive tones of the electric bass currently plundering through the walls of his hotel room and into the streets, completely de-contextualized from the rest of the band.

The next day he’s at a rehearsal for a Charlie Parker tribute at Tipitina’s in New Orleans. The bass player is so frustrated by the lack of structure that he walks out. "The reason I play music is that I don’t know what’s going to happen," Chadbourne says. "The lack of bass was a problem, though, since our bebop playing required the walking bass line." These final lines of the initial reading gave way to a bass solo from Menestres. The epigraph has come to a close.

Chadbourne’s writing is in the style of surrealist ethnography. He doesn’t bother with transitions between dreams and reality, much less citations, but that doesn’t make his observations any less intellectual. "Eugene has been doing this kind of writing for years," longtime Triangle musician Jim Watson of the Red Clay Ramblers remarked to me after the show. Like Chadbourne’s writings as a jazz critic [1] and his musical output, his primary objective, it seems, is to transcribe the entire world. But not just any world — his world.

As Menestres walks the bass line, Chadbourne picks up his guitar, and the two launch into an interpretation of Thelonious Monk’s song "Think of One." One of Chadbourne’s favorite approaches to Monk compositions is writing lyrics to the instrumental melodies. I interpreted his original lyrics as referring back to the depleting reality of life on the road as a working musician: "Think of one itinerary, Think of where I’ve stopped, Remembering the order, Dismembering til numb."

After the Monk tune, he leans into the microphone: "This is in memory of Hans Reichel." The percussive atonality of the piece reflects Chadbourne’s first releases as a musician. In both this concert recording and in those early instrumental recordings, the whimsical satire of his speaking and singing voice is absent. But isn’t banging and twanging on the guitar as if it were a drum from some bizarre universe inherently and radically absurd enough? Chadbourne has a way of making just about anything funny, even atonal instrumental guitar pieces, and this one inspires chuckles in the audience.

The story that comes after, while not without humor, is a sad one. Chadbourne’s writings often call attention to the poor working conditions of musicians. This one is the story of Hans Reichel, a German guitarist and experimental luthier visiting Greensboro, staying with Chadbourne, and attempting to sell one of his custom-built guitars. "This winter in Germany will be horrible," he says. "I need money for coal."

The night after I first saw Chadbourne perform at the Nightlight two years ago, I went home and ordered his now out-of-print book I Hate the Man Who Runs this Bar: A Survival Guide for Real Musicians. The book is a hilarious, insightful, and poignant set of advice and warnings to musicians determined to survive producing work that does not, and likely will never have, mass appeal. Like Reichel, Chadbourne hears bazaar music in his head — a lot of it — and everything he does is aimed at bringing that music into being. Chadbourne refers to himself as "selfish" because he only plays the music he wants to hear, not what he thinks his audience might want. Such lack of creative compromise requires a unique approach to the music business.

"The reason that I play music is that I don't know what's going to happen," Chadbourne says.

Chadbourne was one of the early producers of independent cassette tapes of his music in the 1980s, and the majority of his albums continue to be self-released, often home-burned CD-Rs with homemade artwork. This unorthodox approach has provided Chadbourne a base level of security, enabling a musical life that prioritizes playful exploration. Classical musicians speak of the enormous sense of relief they feel when meeting and working with him.

David Menestres told me about encountering Chadbourne for the first time when he was a student at UNC-Greensboro: "Eugene Chadbourne was the perfect antidote to music school. His sense of humor and determination to have fun while being a virtuosic performer who played only the music he wanted to was the exact opposite of music shcool, where having fun and a sense of humor about music were roundly discouraged." In an interview in Indy Week, oboist Carrie Shull agrees. "It was very liberating. He was immediately very encouraging and positive, just kind of, 'No matter what you do, it's great!' He was very welcoming and open-minded. I was ready for that." [2]

The playful openhearted approach came across clearly in the second half of Chadbourne’s set. His daughters Lizzie and Molly joined on vocals and banjo to form a band they call "The 13 Society." The style shifted from jazz and solo guitar pieces to the country, old time, and rock repertoire that he began to develop after his move to Greensboro in the 1980s. The move coincided with the birth of his daughters, and it was clear that they had been singing some of these songs together for many years. There was a medley of rare novelty Johnny Cash songs, including "I’m a Nut" with the IWW anti-capitalist classic "Hallelujah I’m a Bum." There was a long reading from Chadbourne about his German Jewish mother’s narrow escape from Germany in 1939 with a song based on that story. The event closed with a hilarious version of Frank Zappa’s "Take Your Clothes Off When You Dance." 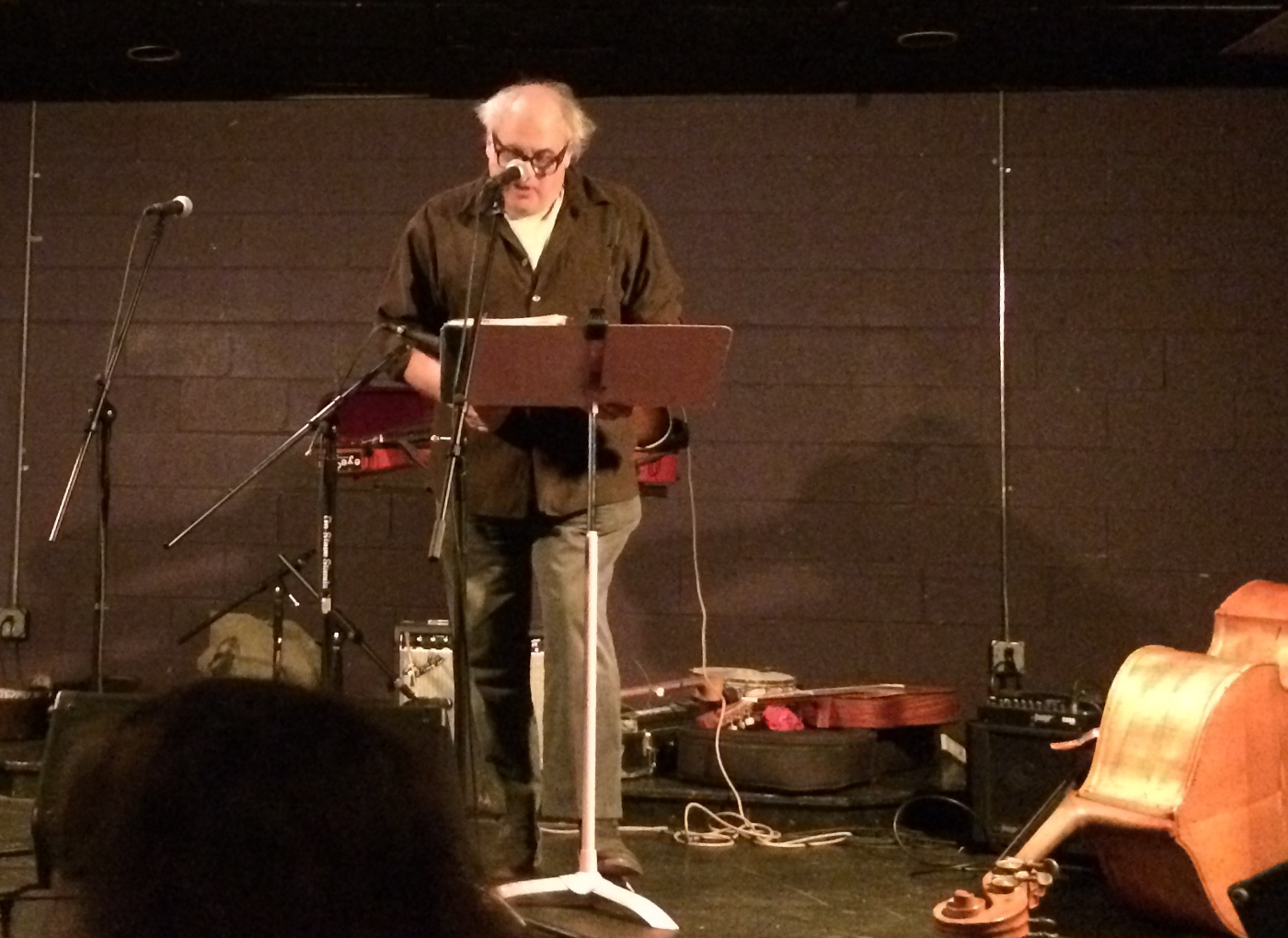 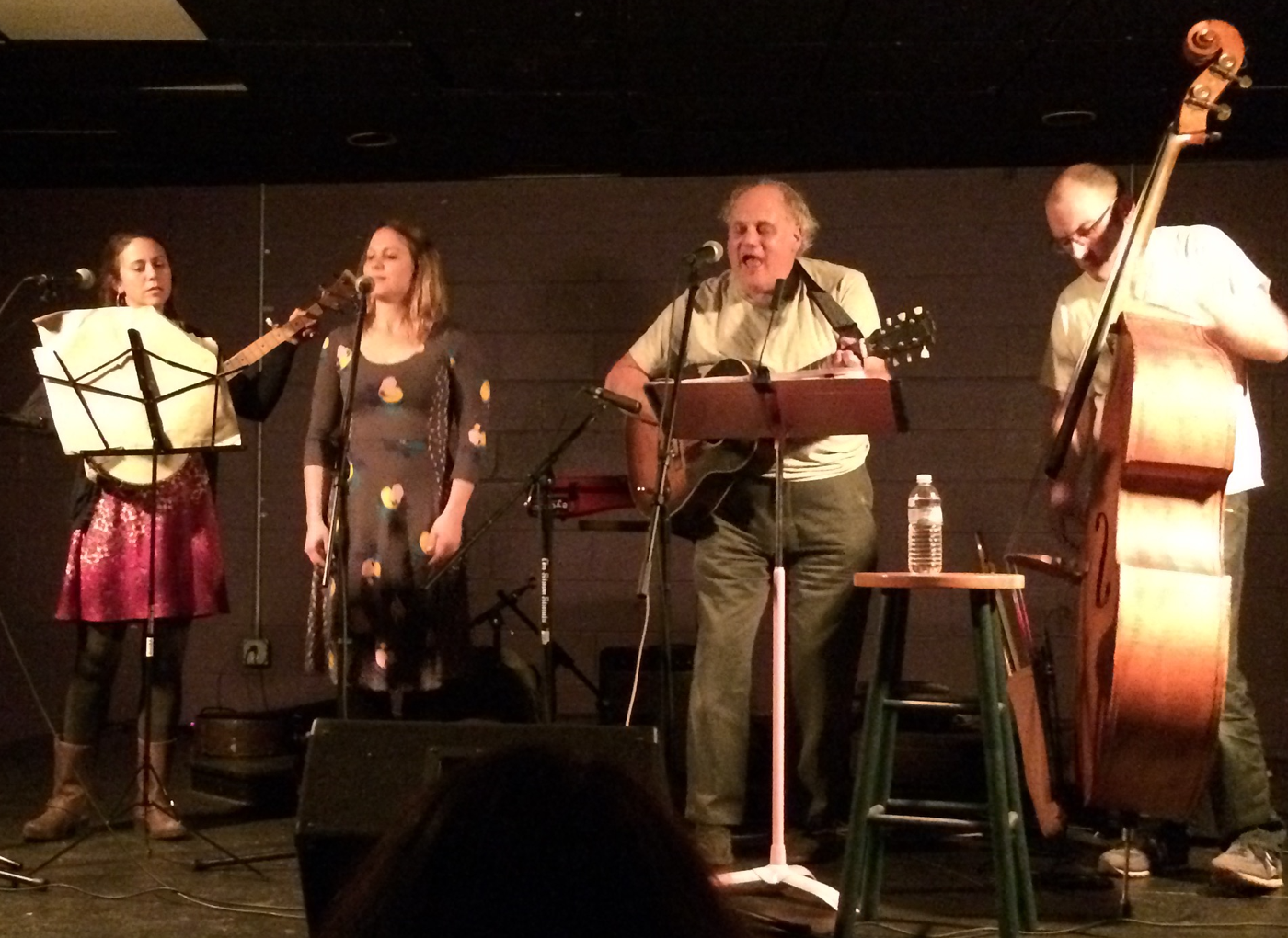 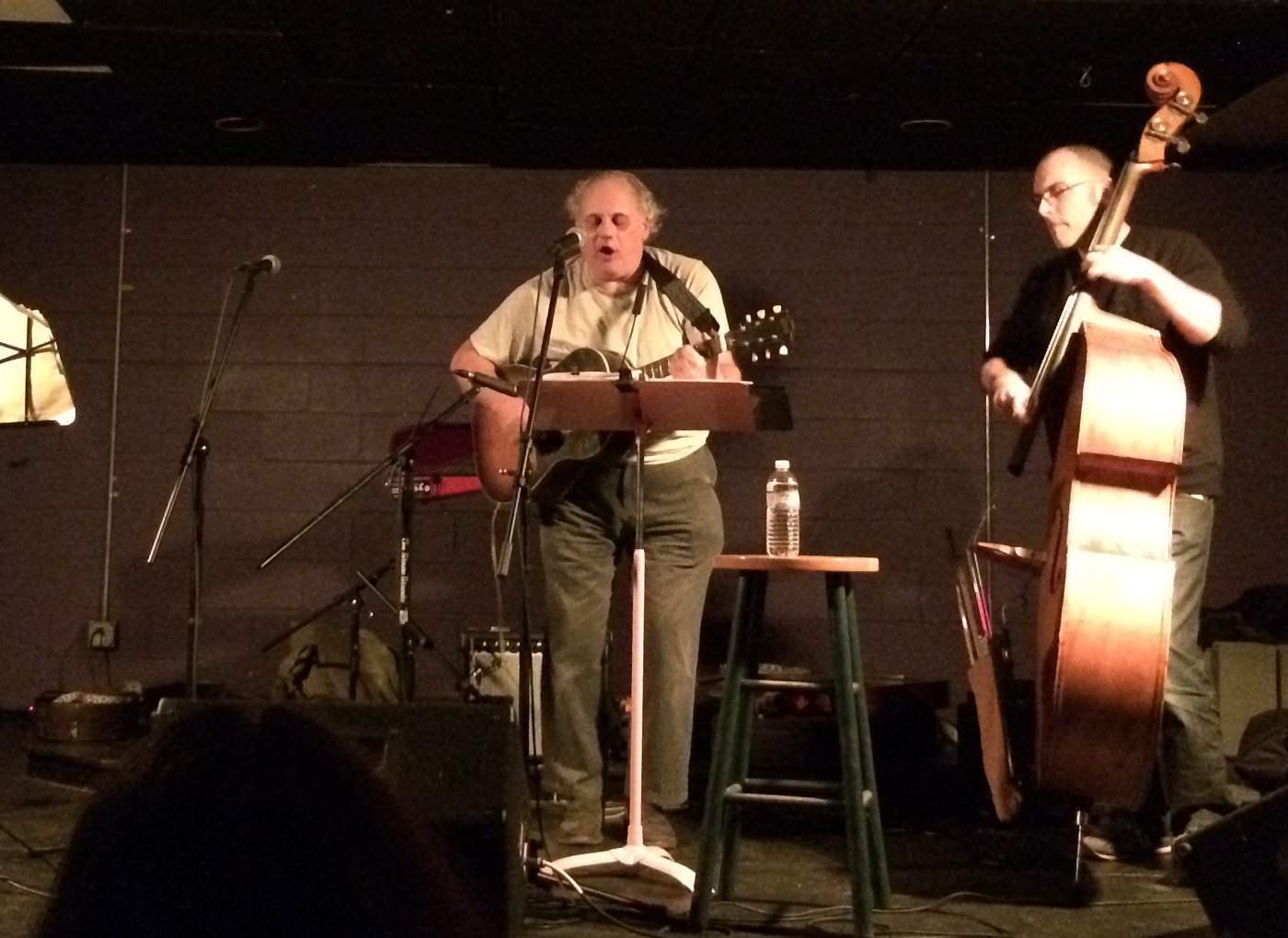 JAY HAMMOND is a graduate student in Cultural Anthropology at Duke University. His doctoral research examines historical and contemporary patterns of circulation between New York and New Orleans among early jazz musicians. He was the Anne Firor Scott Public Scholars Fellow at the Forum for Scholars and Publics during the 2017-2018 academic year.