The book Latina Voices/Voces de mujeres latinas (2019) emerged as an idea to compile short biographies of Latina women in the United States and, particularly, to share their stories, their work, and their struggles to create a more fair and equitable world. 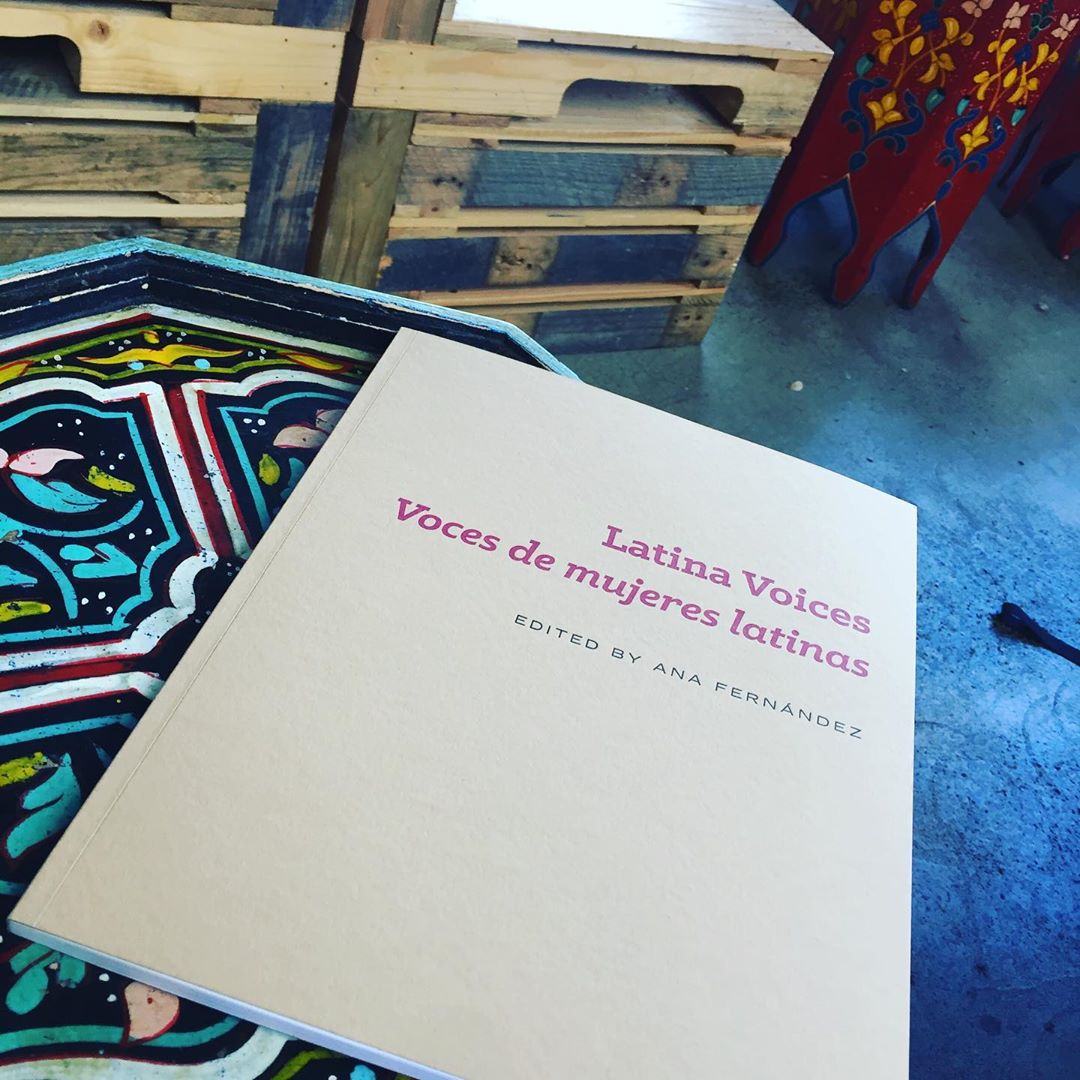 200 copies of Ana Fernández's self-published Latina Voices/Voces de mujeres latinas were distributed to schools, libraries, and local organizations. This book is not for sale.

The collection brings together 14 bilingual stories (English and Spanish) about well-known women and others who are not as recognized.

The idea for this project is neither modern nor original. In recent years, however, and with the increasing number of social uprisings that emphasize gender equality, a series of books about women's biographies has emerged with the objective of putting women's history in the spotlight. Surely, the one that had the heaviest impact was Elena Favilli y Francesca Cavallo's Good Night Stories for Rebel Girls: 100 Tales of Extraordinary Women (2015). The collection of 100 biographies illustrated by artists from all over the world began as a modest, crowdfunded project, but its enormous and overwhelming success led to its translation in several languages and marketing in many countries.

This project uses word and image both to honor the lives and work of the Latina women who struggle every day to change and improve the world and to make them visible in the world.

Shortly thereafter, a sequel profiled an additional 100 women. This unexpected success inspired and encouraged others to publish new works that have similarly been well received, including Rachel Ignotofsky’s Women in Science: 50 Fearless Pioneers Who Changed the World (2016) and Women in Sports: 50 Fearless Athletes who Played to Win (2017), or Ellen Bailey’s I am a Wonder Woman: Incredible Women to Discover (2018).

Although works that highlight the stories of significant women and make them more visible are undoubtedly welcome and necessary, descriptions of Hispanic and Latina women’s stories within these pages are remarkably scarce, and in some cases nonexistent, as are, in many cases, Latina artists. The few models included, although important, offer little new information about women who have already been reduced to iconic status, e.g. Frida Kahlo, Selena, and Eva Perón. The limited representation of Latina experiences seems to suggest that Latina women do not figure among those incredible and extraordinary politicians, doctors, judges, scientists, activists, writers, painters, sportspersons, and educators who have already or are in the process of changing the world, and who weren't or aren't "afraid to play and win."

This project uses word and image both to honor the lives and work of the Latina women who struggle every day to change and improve the world and to make them visible in the world. These are the women who serve as models and inspiration to other women, to other female adolescents. Furthermore, in creating a book, we hope to offer schools and other community learning spaces a reading and writing tool and inspiration to foment artistic and creative skills, as well as stories that parents and children can read in Spanish or English.

The project is being shared throughout Durham as an exhibition as well. The first exhibition took place from September 15 to October 15 at the Durham County Library, North and East branches. As a result, Merrick-Moore Elementary and E.K. Powe Elementary School expressed interest and requested the use of panels to carry out different activities of their own. 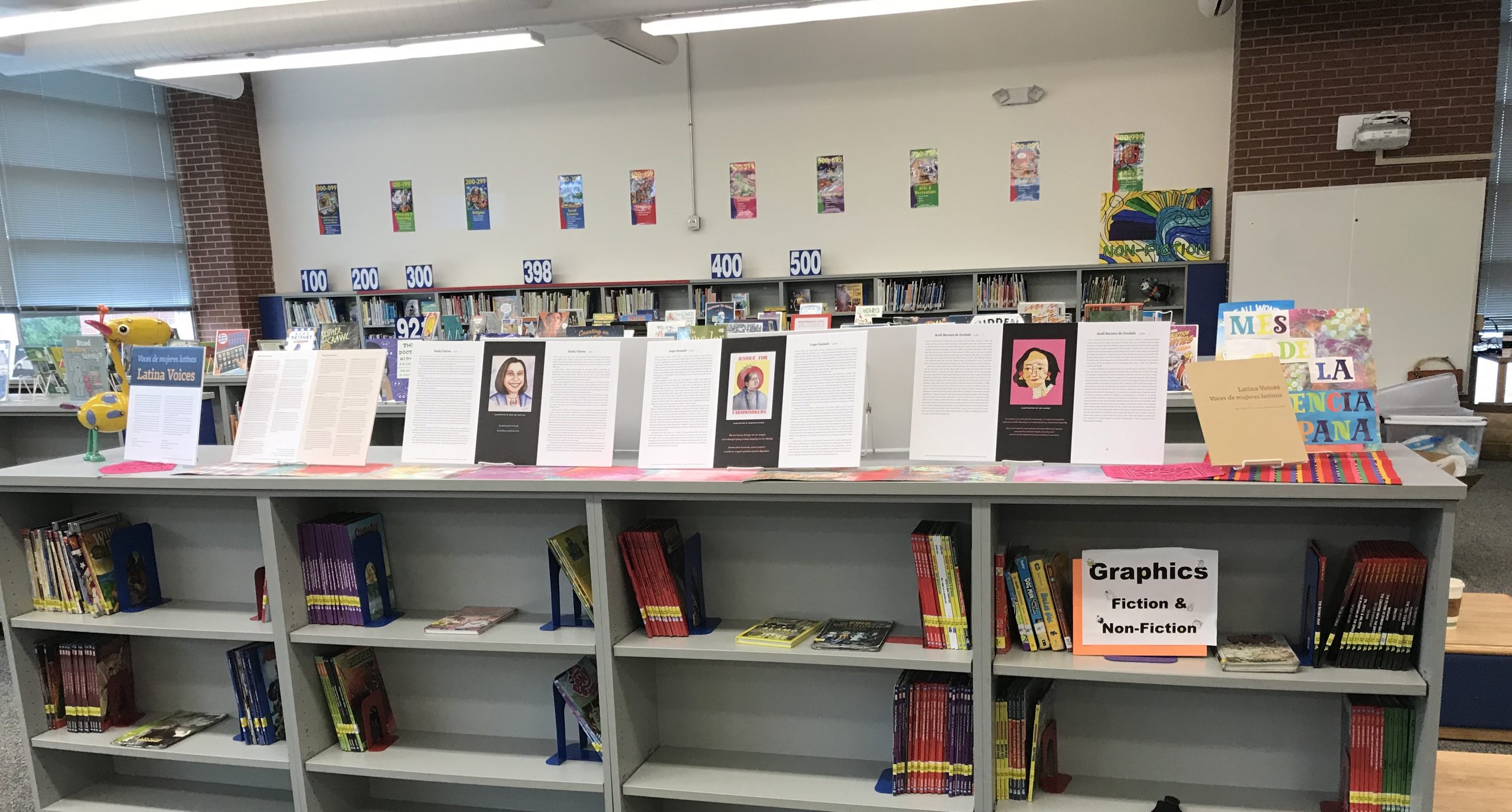 The exhibit at Merrick-Moore Elementary School.

In Fall 2018, this project was included as part of the undergraduate course, “Spanish 308: Latinx Voices in Duke, Durham and Beyond.” Students in the course — Sarah Ali, Angel Garza Reyna, Frederic Goguikian, Enrique Latoni, Jasmine Leahy, Juliette Mangini, Cristina Perez, Anthony Rodriguez, Alex Scheuermann, and James Toscano — were responsible for carrying out research and selecting women, many of whom were interviewed directly in person or by phone.

This project also makes the work of Latina artists more visible. Two of the illustrators, Paulina Asturias and Natalia Mesa, are students at Duke University. The rest perform their professional work in different parts of the United States: Alexandria Canchola, Josie Del Castillo, Monica Lugo, Clarissa Martinez, Ana Nuñez, Samantha Rawls, and Claudia Rodríguez Finelle. Thanks to all of them for creating these illustrations, each in their own style. Together they make up a beautiful collage of creative diversity. Thanks go as well to Dave Wofford of Horse & Buggy Press for taking the words and images and combining them in such an elegant way. 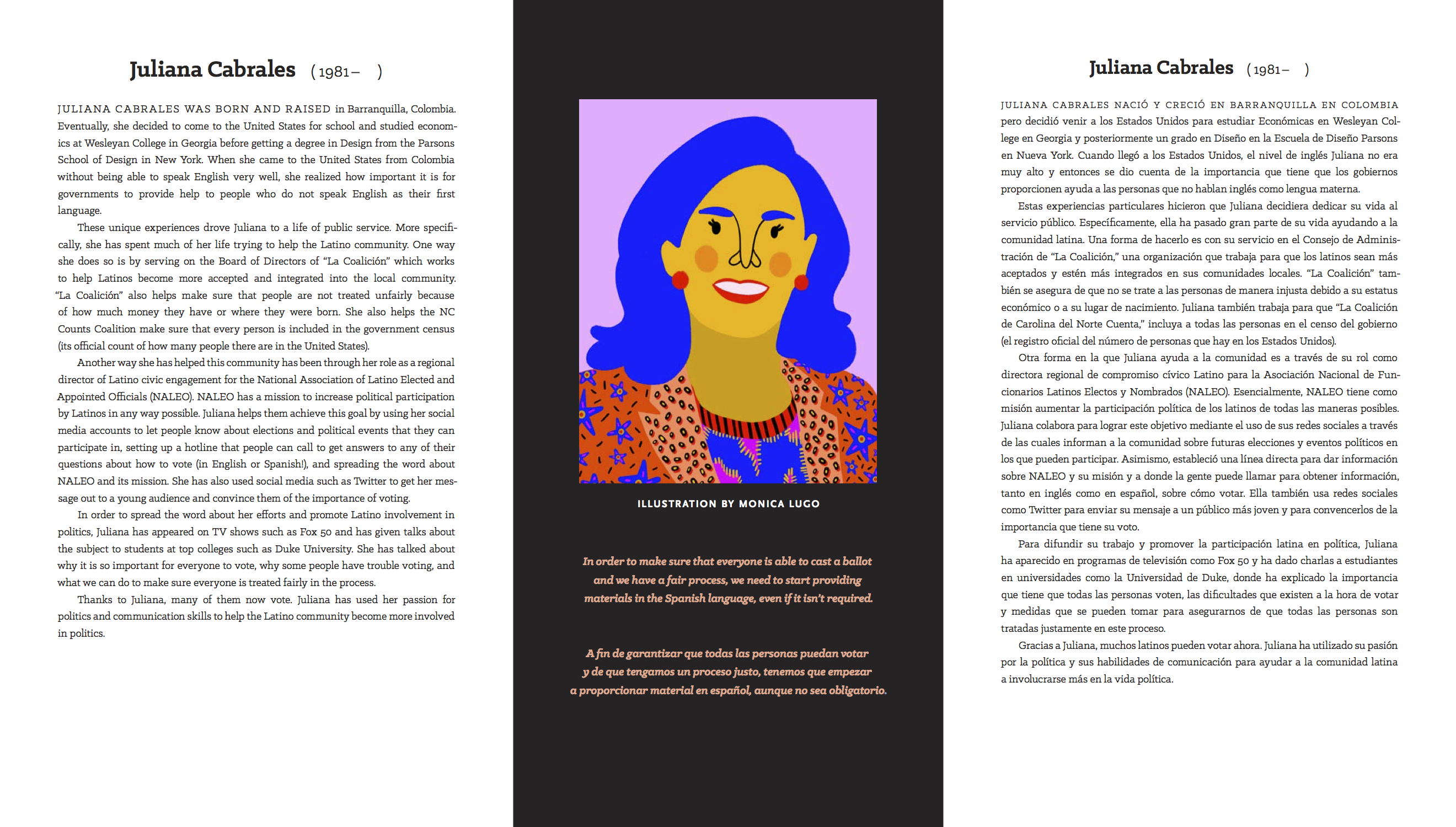 Until December 4, the exhibition Latina Voices/Voces de mujeres latinas is on view at Cocoa Cinnamon in Lakewood (2013 Chapel Hill Rd, Suite A, Durham, NC 27707). The panels will appear at El Futuro in January 2020. For information and updates, follow us on Facebook and Instagram.

This project has been possible thanks to the David L. Paletz Innovative Teaching Fund and to the generous support of the Department of Romance Studies, the Forum for Scholars and Publics, the Trinity Language Council, Service-Learning, the Office of Durham and Community Affairs, and the Spanish Language Program at Duke University.

ANA FERNÁNDEZ is a Lecturing Fellow and Spanish Cultural Advisor in the Department of Romance Studies at Duke University in Durham, North Carolina, where she has lived and worked for the last nine years. Fernández holds a Master’s degree in Spanish/ESL and a Master’s degree in Secondary Education, both from West Virginia University. She earned her Ph.D. in Hispanic Languages and Literature at Stony Brook University, New York, with a dissertation on Ángeles Vicente, an early twentieth-century Spanish writer, and her relationship to modernity. Fernández's research and teaching interests focus on gender studies, feminist theory, and Spanish and Latin American women writers and film directors.