In this creative autoethnography on the meaning of wearing (the) pants, Mariana Tandon places her work as a feminist against the backdrop of Indian women’s struggles to make pants an acceptable form of fashion. In the act of embroidering a pair of her own pants, she connects more deeply with her Indian heritage and explores what role-equality in romantic relationships — metaphorical pants-wearing — looks like.

My grandfather immigrated from India, a place where women rarely, if ever, wear pants in public rather than a sari or other skirt. With this project and exploration, I represent the ancestral relationship between women and literal pants-wearing alongside my personal experiences as one of the few Indian women in my community fighting for role-equality in romantic relationships. 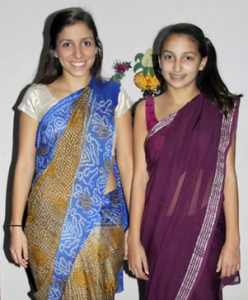 Making things can help us express what language cannot. Through the act of embroidering, I physically transform a pair of pants while engaging critically with the histories and social contexts of pants-wearing in Indian and Indian-American communities.

I then challenge what wearing the pants might look like today within romantic relationships, and I explore what might be necessary in order to achieve gender parity in everyday contexts.

I Shall Wear the Pants 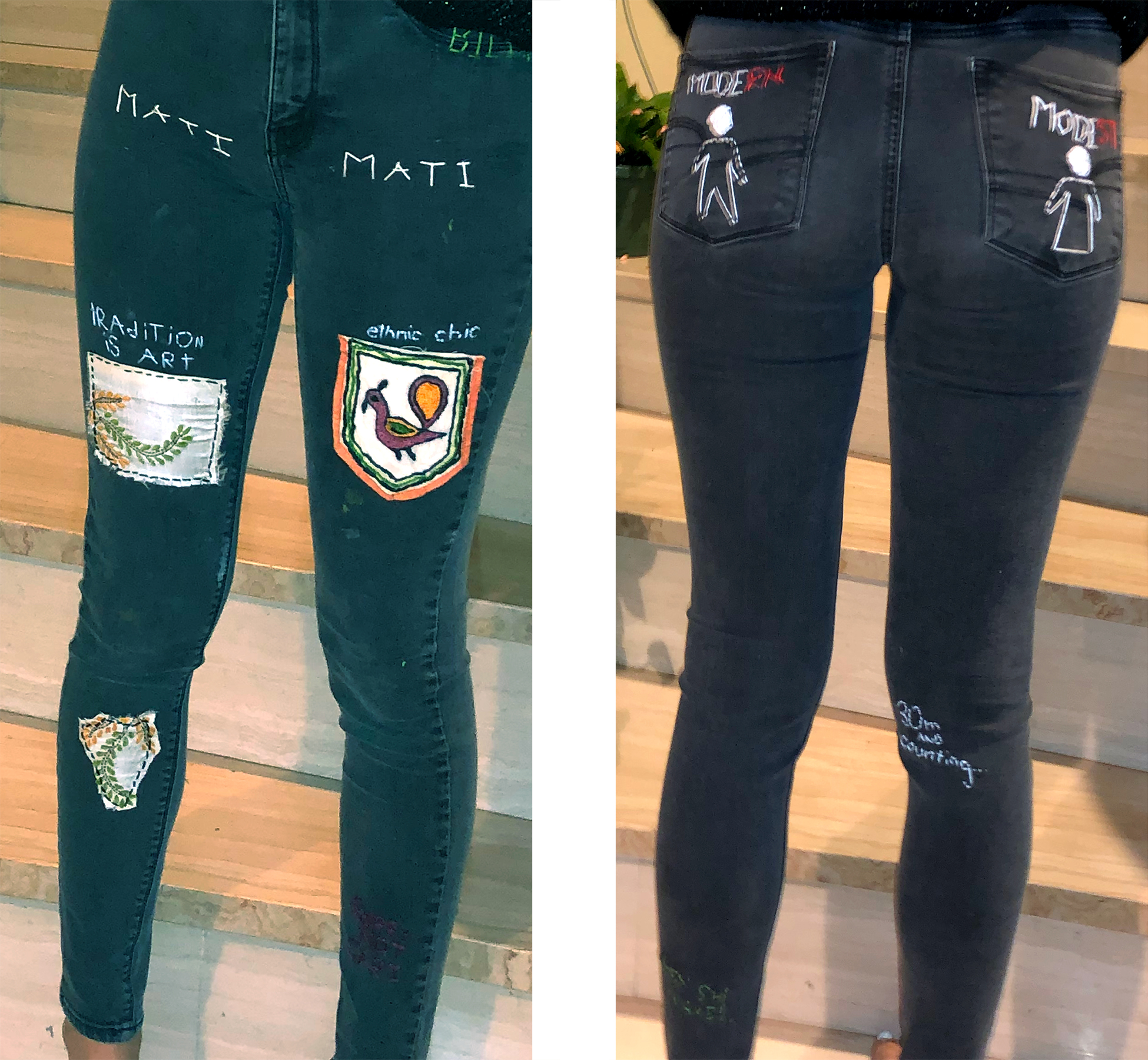 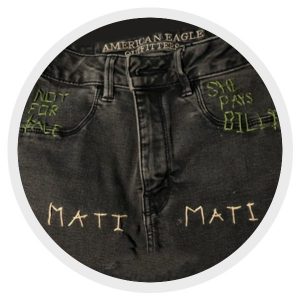 "Mati as a verb," writes Emma Tarlo, "can also gloss the act of folding things such as clothing or in compound forms the reception of alms in the folds of one's clothing." The noun mati "refers to a person’s lap, a 'fold' in the body created by sitting; it also refers to a woman’s pelvis or abdomen." 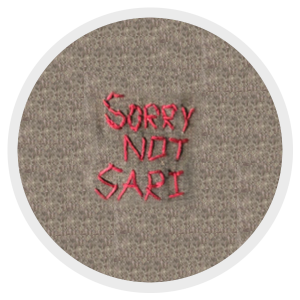 A sari is a garment consisting of a length of cotton or silk elaborately draped around the body, traditionally worn by women from South Asia. This is a feminist declaration that says, Sorry! I won’t be wearing a sari! I am going to wear the pants. 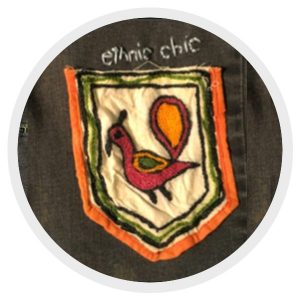 In Indian villages, there has been a growing fear of handiwork leading one to appear "too ethnic" (Hancock, 310). This effect is part of the more global trend of westernization. In fact, in neighboring Pakistan, the Pakistani elite very consciously wear and use "made in forrun" or imitatively Western-looking branded products. There seems to be a prejudice against the handloom and handcrafted look, perhaps because it is too reminiscent of India.

In the 1950s and 1960s, Pakistani diplomatic wives did wear saris, although this is not the case today (Tyabji, 252-253). Villagers, meanwhile, had changed their dress in order to be taken seriously by people from higher castes.

At an international level, "ethnic chic" masquerades as real Indian dress from an "authentic Indian village," even though, at the local level, it bears little relation to the village aesthetic on which it is founded (Hancock, 315).

Recently, however, the rich have begun again to fancy the embroidered fashions of their ancestors. Villagers, for their part, have learned to manage the negative connotations associated with wearing more traditional dress.

Socialites such as Liveleen Sharma a Delhi "go ethnic" by dressing like low-caste Bungri women. To lend authenticity to her conversion, she purports to hold "traditional" values concerning a woman’s role and her natural "inferiority" to men (Hancock, 314), a stance that brings stress to village women who have not been privileged enough to choose their roles in society at all.

Why would she choose this? 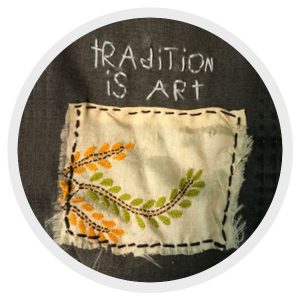 "Foreigners, the elite, only desire the decorative aspect of 'tradition' without any of the hardship or discomfort," writes Mary Elizabeth Hancock (Hancock, 304). Significant separation from village life has only encouraged higher-income Indians to feel justified in curating which elements of their historical cultures to glamorize, and which to ignore.

"Beautiful designs from a rich past" and "art is tradition" were phrases printed in advertising selling "ethnic chic" clothing (Hancock, 284). Wealthier shoppers tended, and still tend, to turn to problematic traditions, or traditions that evolved out of a struggle for survival, to uphold as art. Yet those same shoppers often fail to note or acknowledge the histories of the traditions and the social contexts of both the art and the artisans. 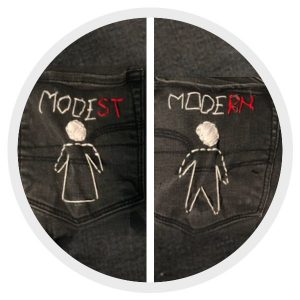 When western fashion arrived in India, some women "sold their old skirts or used them for stuffing quilts or as household rags, some maintained them though. Still felt the need to stay modest" (THIS IS NOT THE EXACT QUOTE HERE, AND REALLY SHE SHOULD PARAPHRASE Hancock, 295). On the other hand, "men of the village dressed almost exclusively in western styles" (SAME HERE Hancock, 295).

This pocket design speaks to the conflict women faced between feeling backward and uneducated in their village skirts, and the cultural rules that dictated against women wearing pants. 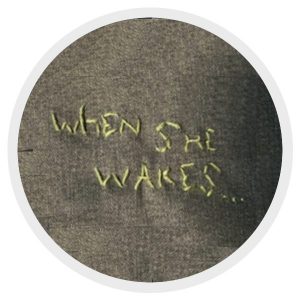 This is a parody of the common inspirational quote, "Let her sleep, for when she wakes, she will move mountains." The "waking" I am referring to is the characteristics of being "woke" in the political sense of being aware of issues concerning social justice. Combined with metaphorical pants-wearing, this means that when she wakes, she will become aware of social issues. She will wear the pants. She will take charge. 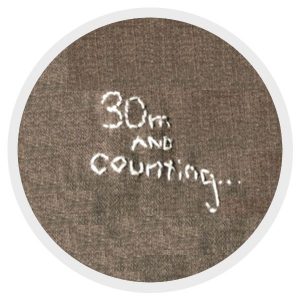 "Skirts as long as 30 meters of material” (THIS NEED CONTEXT AND FOR QUOTE TO BE PARAPHRASED Hancock, 296)

I Shall Wear the Pants 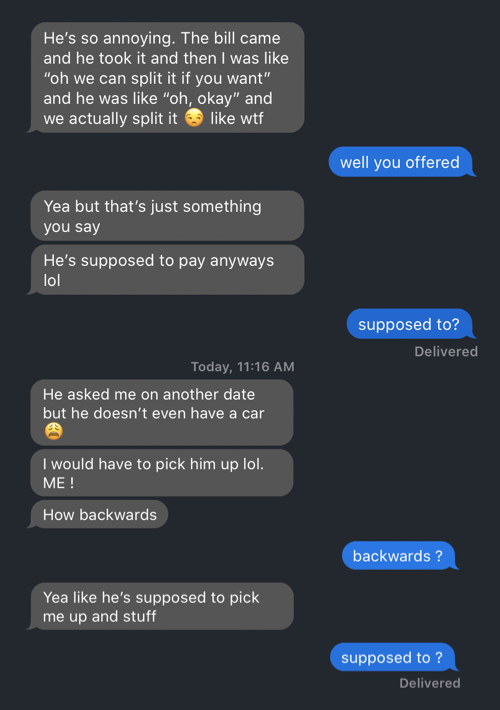 Where did this come from?

But I don't let it sit for long. 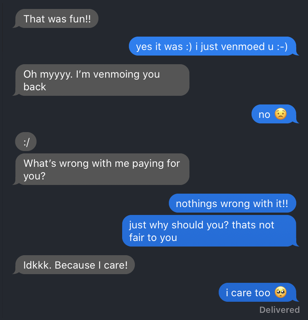 Men have been paying women's way since the dawn of time. For centuries, women didn't work or hold property, so they had little to no means to pay (Sherman, 661).

But oh man I pay bills! I'm an independent woman. I'm running as far away from the confused ideology of "love = possession" as possible.

I know that phrases like "buy me dinner first" are common responses to booty calls. That doesn't sit well with me… and it creates a relationship between sex and money that’s unhealthy.

Can sex be bought like that? Can sex be a return favor?

I’m not for sale.

We know that correlation does not equal causation. Of course. But does the subconscious mind know that?

“I bought her dinner, treated her great, dessert, drinks, all on me.” What should you do when people buy things for you? If you were raised with a grateful heart, you feel like you owe them something.

Women should not be placed in positions in which which they feel indebted to a man — after dinner, as they leave a restaurant, on a date. We know that correlation does not equal causation. Of course. But does society know that?

"Come back to my place. Let me make you a drink." And then what? He may try to pay for dinner to get in my pants, but I'm wearing the pants. I'm wearing them. And I get to choose when I want to be in debt to someone.

When we care about reciprocation, men cannot force debts upon the women they date as a matter of course. Women in my community seeking gender parity strive to be and act as free agents: strong, independent, and powerful; good and full-hearted; graceful and unwilling to disappoint others.

Beyond sex, if he pays for my dinner or provides for me in any way, I will feel extra pressure to forgive, to look past, to stay.

"i know it can sometimes be hard to really walk away from something because you are BETTER than it (cuz that takes a certain confidence and love of yourself that can be hard to muster especially since hes the only person youve ever been with)... let me be your booster then: you are NOT the girl that he has made you"

She is empathetic, independent, and, like all people in capitalist societies, she wants to be debt free. She wears the pants. It would be his honor to pay for her — and he would pay only by her grace.