A cash register as old as this one usually comes with a good story. Not surprisingly, this particular object, now a family heirloom, tells a story of possibility and nostalgia. But it also pushes the boundaries of what it means to be a business owner in America, and what we understand the value of a cash register to be. 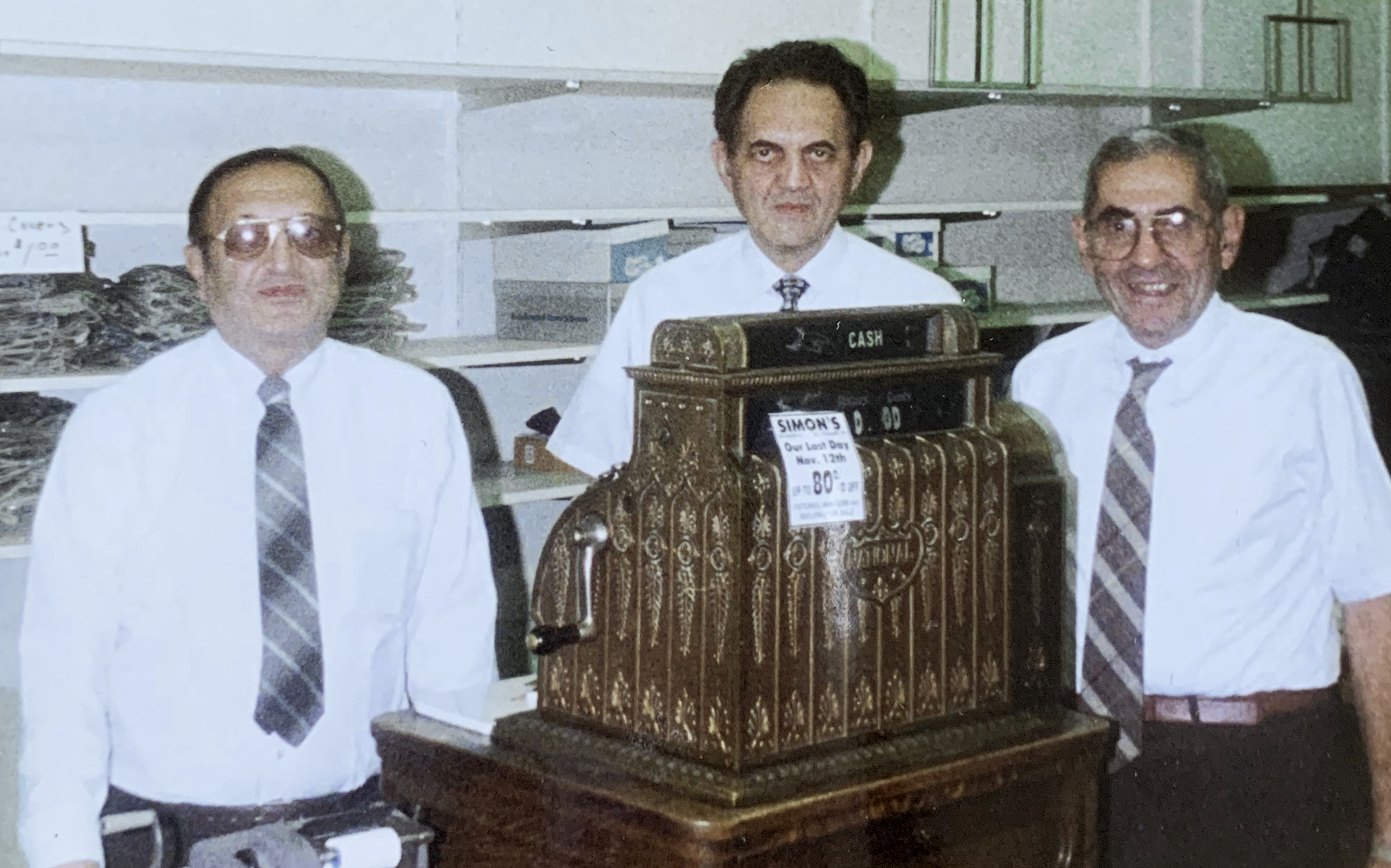 From left to right: My great-uncle, grandfather, and their cousin behind the cash register in their Pennsylvania general store. All information about my family background in this essay came from a confidential interview with a close family member.

My maternal great-grandfather immigrated to the United States from Lebanon around 1915 with almost nothing. In the space of a few years, he had saved enough to buy his own cash register.

Chosen by his family to have a chance at a better life, my great-grandfather arrived on Ellis Island and made his way to western Pennsylvania, where other Lebanese and Syrian immigrants had established a small but strong community. He was just a teenager.

With little to his name, he survived on the generosity of fellow immigrants for several years, yet he yearned for something more. He started collecting anything he could get his hands on and began traveling from small town to small town peddling ribbons, buttons, and other trinkets. After many encounters in many different towns, and with the help of the dowry provided by his new Lebanese Syrian wife, he saved enough to buy what would become his representation of the American dream: a cash register.

The Saloon Origins of the Cash Register

As Isaac Marcosson details in Wherever Men Trade: The Romance of the Cash Register, the first cash register was built in 1878 by a man named James Ritty and his brother, John. The owner of a popular saloon in Dayton, Ohio, Ritty had become increasingly frustrated as business boomed but profits dropped. Eventually, he discovered that it was easy for his bartenders to skim off the top of their earnings because the cash drawer was easily accessible and money was entered into record by hand. 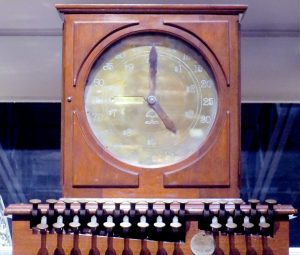 Reproduction of the Ritty Dial, patented by James and John Ritty in 1879

Even after firing them and hiring new bartenders, Ritty's profits disappeared. And so, armed with the training of a mechanic and inspired by the rhythmic ticking of a boat propeller, he created a crude prototype that would eventually develop into the modern-day cash register. His prototype served one purpose and one purpose only: to count sales on a face that resembled a clock so that no one could steal without being caught. While there was still no way to safely store money from sales, the prototype computed what was earned.

After revising his invention and including rolls of paper so that customers could also see how much they paid, Ritty created a cash register factory and sold it to a man named Jacob Eckert, who went on to establish the National Cash Register Company. Ecklert would add the famous drawer and bell to Ritty’s invention, providing the final piece that made the cash register a means of protection for business owners. John H. Patterson purchased the National Cash Register Company in 1884 and had made the cash register a fixture in American business by the early 1900s.[1]

With so much emphasis on the prevention of stealing and embezzlement, the cash register came to represent not only American consumerism but also a form of distrust.

With so much emphasis on the prevention of stealing and embezzlement, the cash register came to represent not only American consumerism but also a form of distrust. Acting as a metallic stronghold for business owners, the cash register gave them a way to take a break from their work without worrying that money would go missing. It was nicknamed the “incorruptible cashier,” one that could “stop mistakes” caused by distractions and “save time,"[2] and one that gave owners “complete control”[3] over profit by decreasing the “mental change computation”[4] that caused loss.

The sales pitch focusing on efficiency was not uncommon during the industrial age, when speed and accuracy were markers of financial and cultural success in the United States. Cash register marketing, however, seemed to go one step further in its messaging, suggesting that, to be successful, one might remove the human element from the equation altogether. Sure, humans had to push the buttons, but they were reimagined as largely unnecessary to accurate computation and safekeeping.

Over time, cash registers replaced the centrality of cashiers to the shopping experience. The increased productivity as a result of using the machine, combined with its substantial bulk, made customer-clerk relations more distanced, less interactive, and less meaningful.

Weighing in at over 250 pounds, our family's cash register stood as tall and proud in the middle of my great-grandfather’s store as it does today in our basement family room. From the gentle curve of its brass exterior to the dollar count displayed at the top in bold numbers, it is a picture-perfect representation of the word, “old-timey.” It looks as if it should exist in black and white, not in the vibrant hues of the polished brass and buttons.

Rather than use the cash register to hurry along transactions and ensure that his employees weren’t tempted to steal, my great-grandfather used it as a way to build community, positivity, and trust.

He saw it as a means of storing money, of course, but he also saw it as an opportunity to create community within his store and connect with the people who passed through. Rather than use the cash register to hurry along transactions and ensure that his employees weren’t tempted to steal, my great-grandfather used it as a way to build community, positivity, and trust.

Gathering Around the Register

With frequent tourists passing through on their way to the mountains but few regulars, he knew he had to do something to garner respect. So he built relationships — by using his cash register as a social hub for his customers, by chatting while ringing people up, and by stepping out from behind the register to break the barrier that it created.

Even the position of the cash register within his store became important. A few weeks after opening, he moved it from a corner to the middle of a wall. Customers began to stop by to talk at the register as they ran their other errands, and he would keep notes on their families or interests to help him make and strengthen connections. He also used the register to store “I owe you” slips when customers couldn't pay.

My great-grandfather chose to foster and contribute to the neighborhood by making his store a place where people felt comfortable. For him, there was no business without community, and no community without trust.

Exquisite detailing in a regal pattern is carved between the buttons and along the sides of our family cash register. On the right side is the crank, waiting to be turned, initiating the bell that rings with every transaction. On the bottom, the wooden drawers create a stand that pops open with every purchase. And taped on top of that, in between the shiny metal and the rustic wood, sits a list of sales taxes, placed there by my great-grandfather and now eroded with age.

As she began ringing up customers as a teenager, she learned the full extent of the store's impact on the community. Her father and uncle continued the tradition of accepting "I owe you" slips, and it was plausible that someone would take advantage of the system. But they rarely did. Sometimes, people bartered using what was on hand, such as a bushel of apples for a winter coat.

When it came time to say goodbye to the store and move on from small-town Pennsylvania, my grandfather asked my mother, his only child, if she wanted to keep anything. She chose the cash register.

My great-grandfather died when my mother was about six years old, but the people she helped at the cash register would tell stories about him, as if they were giving back to his family in thanks for him having helped theirs. When it came time to say goodbye to the store and move on from small-town Pennsylvania, my grandfather asked my mother, his only child, if she wanted to keep anything. She chose the cash register. For her, it held nostalgic value, but it also represented the trust and community created by my great-grandfather and passed down to her.

The cash register now sits proudly on the bar in the basement of my childhood home, where I see it every time I visit. When it comes time for me to choose my inheritance, I will gladly take it. It is a physical representation of the values that I have held my entire life: family, trust, community, and positivity. I hope to pass all of these on to my children one day, with or without 250 pounds of ornate brass and wood packaging. 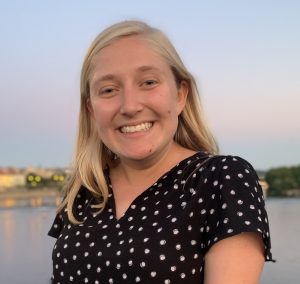 ANNA FINK is a senior at Duke University. She is majoring in Psychology and minoring in French Studies and Cultural Anthropology. At Duke, she is part of Momentum Dance Company, the Tomasello Lab, and Best Buddies. After graduating, Anna aspires to work with kids who have intellectual and developmental disabilities.