A View of Haiti From the American South

Growing up in rural Louisiana, the deep American South, my community preached strong patriotism, strong Christian beliefs, and strong nativism. History in school was taught to follow the same narrative: America wins, and America is better.

In high school, we learned of the cruelties of the American chattel slavery but little of the loss of lives, loss of jobs, and suffering inflicted by the United States on many minority groups through domestic and foreign policy.

We were taught to hear the stories of those who conquered and not the voices of those who suffered. What we learned of other nations served to showcase the successes of so-called Western civilization. In these stories, our country was not held accountable, and that fact diminished my interest in learning more history.

At the beginning of summer 2018, I spent time reviewing documents from the National Coalition for Haitian Rights (NCHR) archive in Rubenstein Library as part of the Franklin Humanities Institute’s Story+ program. The NCHR was an organization formed to extend resources and rights to Haitian migrants coming to United States between 1982 and 2006. During my research, I learned about the history of Haiti and Cuba as sovereign nations as well as U.S. involvement in each country. What struck me most deeply about Haitian and Cuban immigration in the late 80s and early 90s was how it revealed the world, with all of its nations and peoples, as irrevocably connected. This connectedness gave me a new perspective —a global perspective — that has altered my previous, strictly American point of view.

Through my archival research with Story+, I learned to love history again. I learned of Haiti and Cuba’s similar yet different cultures, languages, and international ties. I learned not only the stories of the conqueror; I learned about the lives of those who suffered and continue to bear the burdens of racism, corrupt governments, and apathetic leaders. I learned how Haitian migrants received fewer rights guarantees than Cuban migrants. U.S policy, for example, recognized Cubans migrating to the United States as asylum seekers, which granted them resources and rights to live legally in America and fostered strong Cuban communities in Miami and New York.

Through my archival research with Story+, I learned to love history again.

Haitians were not recognized as asylum seekers. They were treated as economic refugees, as fleeing their country for monetary reasons, even though many were fleeing for their lives. As a result, many Haitians were deported or detained in detention centers and treated as criminals. Even within these detention centers, many experienced worse conditions than did Cuban detainees. My archival research taught me to consider the repercussions of U.S. policy on all human lives, and to appreciate the multiple, equally important perspectives that the serious study of history can reveal.

Images are powerful tools of change, and they captivated me the most in the NCHR archive. NCHR employees in Haiti often documented local atrocities through photography. The most captivating image I came across depicts roughly seven military men in Haiti marching in the streets. The picture was taken in 1986, when violence in Haiti was at its peak. Haitians were escaping the dictator Jean-Claude Duvalier and his military regime, the Tonton Macoutes. Even though Haitians had begun fleeing years earlier, the recent election of President Reagan in 1981 accelerated the violence in Haiti. The previous American president, Jimmy Carter, had prioritized human rights issues in his foreign policy, and Haitian leaders refrained from authorizing extremely violent acts against the public in order to continue receiving U.S aid and political support.

President Reagan, however, did not prioritize human rights once elected. Later, Reagan would begin the Haitian Interdiction Policy that forced Haitian refugees into detention camps and treated them as economic refugees. Once President Reagan was elected in 1981, the Macoutes rose to power. Many scholars, teachers, artists, journalists, and other educated Haitians were imprisoned or killed. The goal of the military regime was to maintain power by silencing anyone who might have questioned or opposed their dictatorship and ensuring that the majority of Haitians remained poor and uneducated. As a result of the Macoutes’ extremely violent practices, people began to rebel and flee. 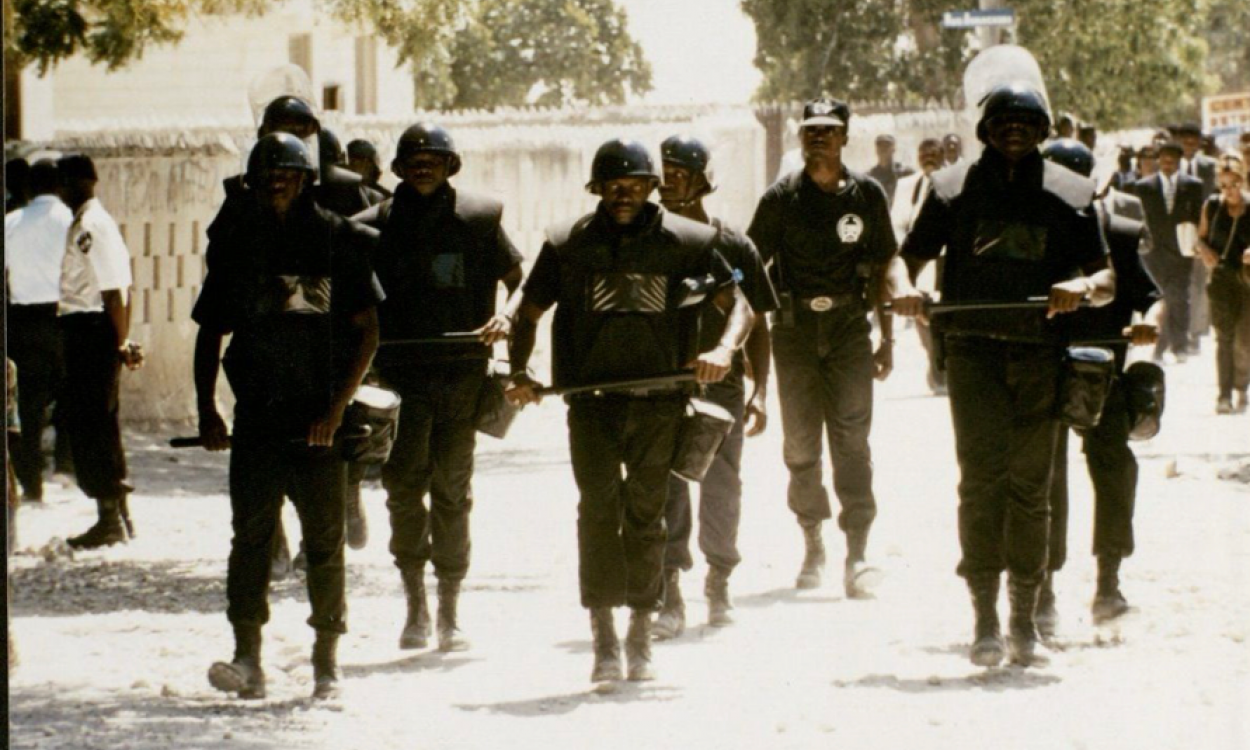 By 1986, Haiti had become extremely dangerous and President Duvalier had fled the country. Haitians were fighting for their deceased family members, for restricted resources, and for the future of Haiti. In the photo above, members of the Haitian military, clearly on a mission, are pictured in formation wearing heavy, black caps and clutching weapons, seemingly with the intent to intimidate, as they escort several dignitaries wearing suits and dresses. The photo resonated with me because it seemed to capture the violence, suffering, and corruption at work in Haiti at the time, and because it pointed to extensive human rights violations that went underreported in the U.S. media, and which I had not learned about in school. Had I not undertaken this research project and discovered what it was like for Haitians and Cubans living though the time, I would not have fully grasped the effects of U.S. immigration policy on people’s lives and longevity.

Today, immigration is ongoing across many borders and many seas and involves many different groups of people. It has plagued political leadership, governed foreign and domestic policy, and polarized people for decades. Rich and powerful nations exert extreme pressure on less wealthy nations and peoples, which often leads to human rights violations, as we've seen in Haiti and Cuba. I've learned that upholding human rights — respecting individuals for our innate similarities rather than our differences in nationality, skin tone, or class — must form the cornerstone of any immigration policy that strives for justice. This tenet comes down to something all children in Louisiana learn and what many call "southern hospitality." As the sentiment goes, treat everybody like family, because we are all brothers and sisters in this world.

The 2018 Story + team Remapping the Caribbean: Archives of Haitian & Cuban Migration, Detention & Legal Activism partnered with the John Hope Franklin Humanities Institute @ Duke University to explore the archival collection of the National Coalition for Haitian Rights. The group consisted of Professor Laurent Dubois, Duke History Ph.D. student Ayanna Legros, and three undergraduates: Aasha Henderson, Sanha Lim, and Alyssa Perez. Through an analysis of photography, archival documents, first-person testimonies, and organization documents, we sought to understand the genealogy of immigration to the United States in the context of Cuban migration from the 1970s to the 2000s. We focused on human rights abuses of Haitians within the island and in the diaspora to understand the particular challenges Haitians have faced while crossing borders to escape political, economic, and social unrest in Haiti. As part of the Story+ project, the team created a Wikipedia entry, wrote blog posts, and conducted interviews with original board members of the organizations, with the goal of elevating the experiences of Caribbean peoples by showcasing how important first-person accounts and testimonies are in battles for human rights.

AASHA HENDERSON is a rising sophomore from Louisiana. She is an aspiring world traveler and lifelong learner. Aasha plans on attending medical school upon graduating from Duke and using her medical background to practice and advocate for public and global health issues and policy.